What's New in the FAA

Register Now: This Could Be FAA's Biggest Conference Yet

APAC Campus Challenge is Just Around the Corner

What's New Around the State

What's New in the FAA 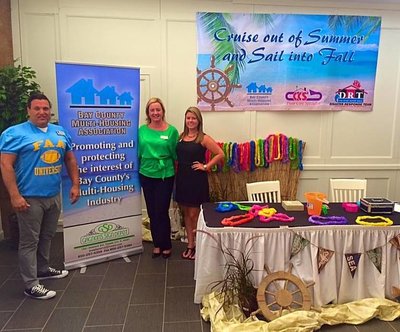 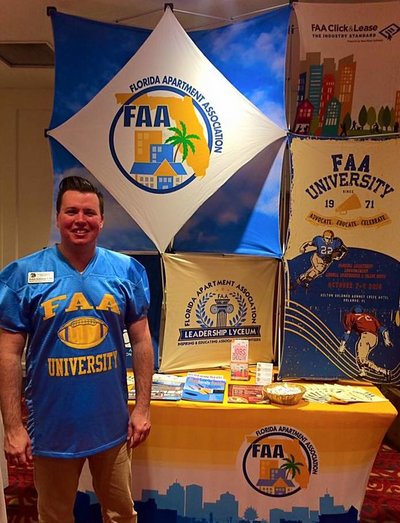 Register Now: This Could Be FAA's Biggest Conference Yet

FAA University is promising to be the biggest Annual Conference & Trade Show ever presented by the Florida Apartment Association. How do we know this? Our host hotel has already sold out in record time!

If you haven't yet registered for the conference and booked your room, not to worry: We've arranged accommodations at the nearby Meliá Orlando Suite Hotel at Celebration. Shuttle transportation will be provided to make your conference experience as convenient as possible.

APAC Campus Challenge is Just Around the Corner

Now that the legislative session is over, APAC fundraising is in full swing, and the biggest APAC fundraiser of all time is right around the corner. The APAC Campus Challenge is THE event at which to be seen supporting APAC! Plus, it’s a fun and exciting way to participate with your property management team or best clients to benefit APAC.

The APAC Campus challenge is critical to help APAC reach its 2015 goal of $139,000. Thank you to all the management and vendor teams that are participating this year:

Sign up today and be a part of the APAC excitement! New to the Campus Challenge? All are welcome to participate; you can register a team or sign up as an individual. At the event, teams of eight visit customized challenge stations and search for clues, solve puzzles, and complete other fun activities. Each team must visit every station and finish the challenge to compete for the grand prize.

The event is open to all fitness levels and will take place indoors and under air conditioning! All challenge stations are sold out, but sponsor opportunities are still available.

What's New Around the State

Three mixed-use projects North American has completed to date — The Deck, The Block and The Axis — represent a total of 377 apartment units (710 beds) and 35,000 square feet of retail being added to the district, where new apartment construction has dramatically altered the neighborhood around Gaines.

Esterline Construction Inc. of Plant City will build a $15.7 million apartment community in Bartram Park, to include 390 units in 17, three-story buildings.

The city of Lake Mary is looking to create an area called Midtown, in part, to house a new $200 million mixed-use development planned by Unicorp National Developments Inc. The development would include 300 high-end apartments and 200 single family homes.

Bluerock Residential Growth REIT announced that it has acquired a 252-unit Class A apartment community in Orlando, Florida, known as Arium Palms at World Gateway. The property, which the Company acquired through a joint venture for $37 million, is located in the prestigious Celebration submarket, one of Orlando's most affluent, and minutes from the main entrance to Disney World.

A lender-owned apartment complex next to the busy Waterford Lakes Town Center in east Orlando sold via Auction.com for $47.8 million to a California investment real estate firm.

The impending redevelopment of the Orlando Sentinel’s downtown campus apparently has attracted the attention of South Florida real estate firm Stiles Corp. The most recent plan for the multi-phased project featured 746 apartments, 56,000 square feet of retail, 280,000 square feet of office space, a 144-room hotel and 1,820 spaces in structured parking garages on the current Sentinel site.

Stiles also plans to develop a portion of a mixed-use development near Mall at Millenia called Gardens on Millenia.

Two older properties — including a lender-owned complex — sold for a combined $32.8 million earlier this month. Investors spent millions on the two properties, the Royal Isles Apartments near east Orlando and the Reserve at Conway near Orlando International Airport, Orange County records showed.

Bulldozers took down the Venetian Isles apartment complex on Dixie Avenue, which still had several tenants living in buildings before demolition.

A California firm has sued two of Joel Cantor's companies, alleging they quashed contracts to sell the complexes, then refused to return $1 million in deposits.

On a block south of E Kennedy Boulevard between 11th and 12th streets, FCI Residential is spending $60 million to replace an unused warehouse that once served the shipping industry with an Art Deco-inspired apartment house teeming with young professionals.

A burgeoning pocket of South Tampa is slated for two luxury apartment buildings with 296 units dubbed Altis Grand Central. They will rise on Grand Central Avenue on an entire block bordered by Magnolia Avenue, Cedar Avenue and Cleveland Avenue. The site is across from the University of Tampa near Mise en Place and the Oxford Exchange restaurants.

Altman Development Corp., based in Boca Raton, is planning to break ground on Altis Grand Central in spring 2016 and deliver the first units in summer 2017.

Port Tampa Bay has unveiled a "vision plan" for its Channel district real estate that would redevelop 45 acres of port-owned land along Channelside Drive and the Ybor Channel, north of the Florida Aquarium into a mix of residential towers and retail and commercial space — a total of 9 million square feet and $1.5 billion in development costs.

An apartment complex in New Tampa has been sold for $49.325 million, above a 2007 peak price of $45 million. ELRH Investments, based in Jupiter, paid $130,489 per apartment for The 378-unit Preserve at Tampa Palms, at 17220 Commerce Park Blvd., according to Hillsborough County property records.

5 game-changing multifamily developments in the works for Tampa

Five of the most recent multifamily developments to emerge could be the most meaningful of this real estate cycle. Plans are in the works that will redefine the waterfront in downtown Tampa and Rocky Point and continue the revitalization of North Hyde Park.

Gilbane Building Company, a global leader in construction services, joined developer Mark Kauffman and Partners, architect Jonathan Parks, and local officials to kick off the construction of Rosemary Square, a mixed-use project located along the Boulevard of Arts. The now vacant tract of land will become a vibrant area supporting the arts and creating a new hip urban lifestyle.

Inland Private Capital Corporation announced the sale of the 146-unit Berkshire Reserve Townhomes located at 3536 Winifred Row Lane in Naples, for a gross sale price of $20,250,000. IPCC, through its subsidiary which serves as asset manager, facilitated the sale of the property on behalf of one of its 1031 investment programs.

A massive mixed-use project called the Oasis, with 500 multifamily units plus a hotel, office and retail, has been proposed in Hallandale Beach by Romagnole Investment Properties, managed by Mireya de Iadisernia and Guiseppe Iadisernia in Miami Beach.

The Brickell Ten apartment tower obtained a $39.7 million construction loan from Ocean Bank. The Miami-based bank provided the mortgage to Brickell Ten LLC, a joint venture between IB Corp. and Bay Harbor Islands-based Waterstone Capital, which is led by Richard Waserstein. Construction of 155 apartments and 13,400 square feet of retail space is well underway.

Average rental apartment rates increased in Broward and Palm Beach counties in the second quarter and may keep rising into next year. The average monthly rent for an apartment in Broward County during the April-June period was $1,215, up 4.2 percent from the same period last year, according to New York-based research firm Reis Inc.

A group of Argentine investors has just purchased a parcel of land in North Miami Beach, with plans to create a mixed-use development that will include a 30-story apartment building.

San Diego, California-based Fairfield Residential has closed on a $265 million multi-state mortgage on properties including two in Miami-Dade and Broward counties, according to county records.

Chetrit Group purchased eight South Florida apartment complexes for a combined $93.77 million as part of a national portfolio deal. Miami-Dade and Palm Beach county records have revealed the prices of the local properties in the transaction with a combined 1,087 units.

The introduction of residential into the Park at Broken Sound in Boca Raton (formerly the Arvida park of Commerce) has continued at a rapid clip with a seventh proposed multifamily project.

Sandler at Alta Lago, a company affiliated with the Ohio-based Associated Estates Realty Corp., took out the loan on its Vista Lago community at 3130 North Jog Road.

Loftin Place, a rental community in West Palm Beach, has begun pre-leasing as it approaches its December completion date. The development is a collection of 259 rental apartments housed in a mid-rise building at 805 North Olive Avenue.

A development with apartments, commercial space and possibly office space will be proposed at a site near a Metrorail station and Underline, a 10-mile linear park and urban trail being developed underneath Metrorail that will run from the Miami River to Dadeland South Station.

The Cameron Estates, a 548-unit apartment community in West Palm Beach developed by billionaire Jeff Greene, has begun leasing units on the eve of its opening.

FAA's Apartment Political Action Committee (APAC) has already collected silent auction items ranging from fun to useful to luxurious, but we can still use more. Donating items for the auction at our Annual Conference & Trade Show is a great way to show your support for APAC.

Click here for an online form that explains how to donate and offers suggestions for what to donate. If you still have questions, email Courtney Barnard, FAA government affairs director, at courtney@faahq.org.

Mark your calendars! The FAA annual legislative platform meeting is being held on October 28 at Apartment Association of Greater Orlando (AAGO) headquarters. The platform meeting is open to all members of FAA and is your opportunity to learn about FAA's advocacy efforts in 2015 and what lies ahead for the multifamily industry in 2016. Platform meeting attendees will be able to learn about APAC, our lobbying and grassroots efforts, and how to become more involved in shaping the political future of our industry.

The platform meeting is the heart of FAA's grassroots efforts; it is your forum to share what legislative priorities concern your business. If you want to have a voice in the upcoming Florida legislative session (which begins in January 2016) you should attend the platform meeting. FAA government affairs director Courtney Barnard and lobbyist Kelly Mallette will share what 2016 may hold for the multifamily industry. They will discuss what bills have been filed that may help or hurt our industry and what you can do to help.

Remember, this is your chance to have a voice in what legislative issues FAA will address in 2016.